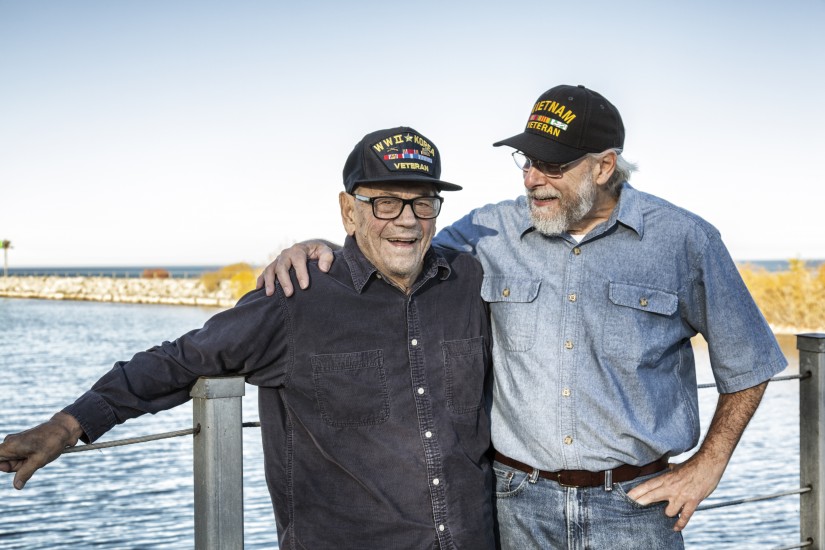 Naval Veteran Paul Bendt of Charleston, South Carolina knows that he isn’t the first person who started following Jesus in the U.S. Military—and he certainly won’t be the last.

“The old military expression says, ‘There are no atheists in a foxhole,’” Paul explains. “Well, in the Navy we had one better than that: ‘You can’t dig a fox hole in a steel deck!’”

Although his four years of service spanned most of the Korean War, Paul didn’t see any action in the proverbial foxhole, on the steel decks of a battleship or otherwise.

“The only battle that I saw was the ‘battle’ of East Main Street, Norfolk, Virginia—known for its harlots, booze, tattoos, and casinos,” Paul confesses. “I lived a pretty riotous life in the Navy. My life was full of sensualism, self-abuse, and self-destructive habits.”
Anyone who met Paul during his spiritual battles on East Main Street would have been shocked to learn that this wild Sailor had spent his childhood as an advocate of American Bible Society.

Despite growing up in the church, surrounded by the influence of the Bible, Paul’s heart remained distant from God.

“I had what you would call a nominal acquisition of Christianity,” Paul says. “But I never gave my life to Christ.”

As the Latin proverb says, “In war, great events are caused by small things.” And while serving in the Navy, the greatest change in Paul’s life would come via the smallest of packages: a tiny Military Bible from American Bible Society.

“When I went into the Navy in 1948, a young chaplain was passing out little New Testaments from American Bible Society,” Paul remembers. “It was just a regular four-by-three-inch New Testament. It’s got a little black cover with a few psalms, prayers, and hymns in the back.”

Paul will tell you, however, that it’s one thing to receive a new Bible. It’s another thing to read it.

“I remember taking it, being polite and saying ‘thank you,’ and then putting it in the bottom of my sea bag,” Paul says. His riotous life in the Navy commenced with God’s Word buried out of sight and out of mind.
Thankfully, that wasn’t the end of Paul’s story.

He uncovered the buried treasure of God’s Word.

“During my last months in the Navy, I very hesitantly and reluctantly answered the call to follow Christ at the prompting of a young Sailor who had invited me to a Baptist revival dinner,” Paul says. “He led me by the hand all the way from conversion to commitment.”

And just like King Josiah rediscovering the book of the law in 2 Kings 22, a newly converted Paul soon uncovered a life-changing treasure at the bottom of his Naval bag.

“That little New Testament from American Bible Society was still neatly tucked into the bottom of my sea bag,” Paul remembers. “I hadn’t seen it in nearly four years. One wonderful day in February of 1952, God’s Spirit moved me to go get it and read it.”

That’s when Paul heard the voice of his Savior speaking to his heart.

“I opened the Bible to the fifth chapter of Matthew—to the Beatitudes. For the first time in my life, the Bible came aglow. I mean it just lit up like a Christmas tree!” Paul exclaims. “It became more than poetry to me; it became the living Word. My life took on an entirely different meaning. Of course, we all know that was the Holy Spirit dealing with me.”

“I’ve kept it very close by,” Paul says of his pocket New Testament. “My wife, Annie, and I have moved about 20 times in our 69-year marriage. We’ve lost, misplaced, and broken a lot of stuff. But that little New Testament survived!”
After his conversion in the Navy, Paul returned to his childhood roots and once again became a passionate advocate of American Bible Society.

The prodigal became an evangelist.

“I decided to support American Bible Society because, from reading their literature way back as a child, I knew they were printing Bibles in every known tongue,” Paul says. “It’s a way of broadcasting the gospel, the good news. It’s an exciting invitation to be a part of the greater Kingdom of God.”

Specifically, Paul and his wife, Annie, started purchasing charitable gift annuities from American Bible Society, which has never missed a single income payment to annuitants since the program started in 1843—not even during economic downturns like the Great Depression.

“American Bible Society has a reputation of being good businesspeople as well as spiritual,” Paul says. “I liked charitable gift annuities because their impact continued in perpetuity.”

Not surprisingly, Paul is most excited to see the spiritual impact that his support is having in the U.S. Military.

“I’m so encouraged American Bible Society is trying to reach more Military members, because I’ve been there,” Paul says. “I know how desperately lonely you can get sometimes. When you’re 1,000 miles away from home, it’s extremely comforting to know God’s presence. And if you don’t have the companionship of the Holy Spirit, you can get into trouble.”

Today, unlike his early days in the Navy, Paul refuses to bury the treasure that changed his life.

“The good news was so effective, so efficacious in my life,” Paul says. “If the gospel could do for another what it did for me, then it’s worth the money.”

“The Word of God brings comfort to soldiers.”

What One Bible Can Do

A Soldier’s Journey from Pain to Promise