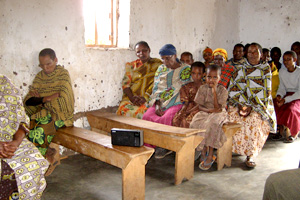 In this listening group in Getarer, Tanzania, men and women sit on opposite sides of the church and listen to the Scriptures in Iraqw, their heart language.

“The word of God is alive and active, sharper than any double-edged sword. . . . It judges the desires and thoughts of the heart.” – Hebrews 4.12 (GNT)

It starts with a two-pound, black device about the size of a child's shoebox. And from there, God's Word echoes into the plains, mountains, coastlines and hearts of people who cannot read but yearns to hear the Scriptures.

The device is a Proclaimer™, a digital player that projects Audio Scriptures to groups of up to 300 using a solar power panel, battery, hand crank or AC/DC charger. Developed by American Bible Society's ministry partner, Faith Comes by Hearing® (FCBH), the player is available in hundreds of languages.

In Tanzania, a country with an illiteracy rate of 30 percent and a plethora of local languages, the Proclaimer has been instrumental in introducing people to the power and hope of God's Word.

This year in Tanzania, American Bible Society sponsored 1,500 listening groups in languages such as Ruhaya, Kimochi and Chigogo. As the groups expand and multiply, 25,000 people are expected to be reached with Scripture.

Before the Proclaimer, introducing people to the Bible was a time-consuming task. After translating the Bible into a new language, teams would often have to conduct literacy training so that native speakers could understand the text. The process took years.

But now, on the streets of Dar es Salaam, Tanzania's largest city, Proclaimers reach all strata of society. In the process, it transforms lives.

One Muslim boy, who washes cars to help support his family, joined a listening group. One day, a fellow worker attacked him in the street. Although the boy's friends encouraged him to take revenge, the boy decided to put his new knowledge of Scripture into practice. He forgave his attacker.

Listening to Scripture also caused one family to re-evaluate the practice of female genital mutilation, a cultural tradition in many African countries. As the family absorbed God's Word by listening to the Proclaimer, they began to question the procedure. Eventually, they decided against requiring their daughter to undergo the practice. Although members of their clan were unhappy and pressured the family to reverse their decision, the family held fast to the conviction they found in Scripture.

The new availability of God's Word through the Proclaimer has changed the lives of thousands of Tanzanians. It is just one more piece of evidence that God's Word is active and alive, affecting all who hear it.

Believers in China's rural Yunnan Province are encountering God's Word in their many heart languages.

The global Bible translation community lost one of its iconic figures with the passing of...