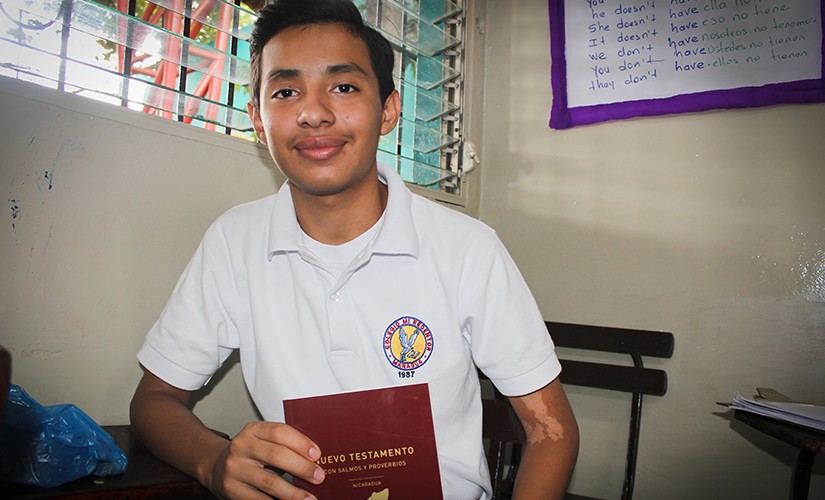 Born in Nicaragua, one of the poorest countries in Central America, 14-year-old Enrique* knew only poverty and challenges.

The young man could not see how faith would make a difference in his life. “I was not interested in the things of God,” he says.

Then, Enrique was invited to church and saw young people around him praising God with joy. “I wanted to try that joy,” he recalls. So when the pastor called for people to accept Christ, Enrique was among those who discovered God’s grace!

“Now I have a different perspective on life because I met Jesus, the best friend of man, and I have put my dreams and goals in the hands of God,” Enrique says.

Through the 1 Million New Testaments outreach made possible by friends of American Bible Society, people like Enrique throughout Latin America are receiving Scripture.

Enrique says, “Now that I am reading and studying the New Testament, I know that there are many promises for those that obey the Lord’s commands.”

In Guatemala, another young man named Alexander is so grateful for his copy of Scripture that he helps others receive it too. “The Word of God has changed my life. That is why I cannot stop sharing it with others,” he says.

Alexander volunteers to put New Testaments in grocery bags that are handed out. “People cried when they received the bags, but they cried more when they saw that it was accompanied by the Word of God,” he shares.

Continued support makes efforts like our 1 Million New Testaments outreach possible! We’re so thankful to our partners for their faithfulness.

If not for Bible-based trauma healing, Raul might be in a gang today.

Sharing the Bible with gang members in Central America.