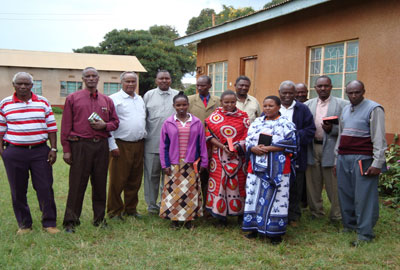 The team of translators working on the Datooga-language Bible is trying to harmonize the different dialects involved in the project for the Bible Society of Tanzania.

“I saw another angel. This one was flying across the sky and had the eternal good news to announce to the people of every race, tribe, language and nation on earth.” - Revelation 14:6, GNT

Tanzania’s 40.5 million people include an estimated 120 ethnic language groups. One of the smallest of these groups are the Datooga people, a nomadic group of about 200,000 living in the Mbulu district of Central-Northern Tanzania - of which 12 subgroups speak various Datooga dialects.

As a result of their nomadic culture and relatively small population, the Datooga people did not have a written language until 1985, when two missionaries from the Evangelical Lutheran Church of Tanzania began creating the Datooga phonology. 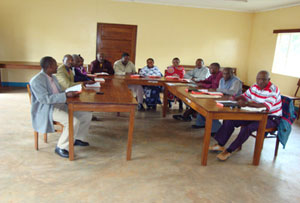 Most Datooga do not speak the national language of Tanzania (Swahili) and less than one percent of the population is literate. Therefore, the existing Swahili Bible is neither accessible nor understandable to most of Datooga.

“The Datooga people consider Swahili and English, the two major languages in Tanzania, ‘foreign,’” said Bishop Charles Kija Ngusa of the Anglican Diocese of Shinyanga. “They remain suspicious and reluctant to enroll their children in formal schools or seek healthcare partly because these services are offered in Swahili and English. Language remains a key barrier to evangelism and ministry among the Datooga.”

According to the U.S. Center for World Mission, Datooga are resistant to cultural change, including belief in Christianity, maintaining a strong adherence to traditional animist beliefs and practices. However, like many animists, the Good News of Jesus Christ is very relevant to their needs once communication can be established in their own language using the traditional media of storytelling and songs.

“My childhood was a very hard life,” said Augustine Nyaghaba of Hanang district, Tanzania. “Living under Datooga traditions and customs meant stubbornly holding on to traditional gods and rejecting everything about the Good News. One day I heard the Word of God for the first time from an evangelist visiting our home and I decided to become a Christian.”

BST also works with regional churches to provide reading materials and to train teachers for a vibrant literacy program. The Evangelical Lutheran Church provides free or subsidized healthcare in its hospital where patients hear the Word of God as they receive treatment.

As part of the ongoing Bible literacy work, 200 people will attend classes facilitated by BST-trained literacy teachers living in the community, using the newly translated Scriptures for text. Of the 25 trained literacy teachers from different churches, 20 are actively facilitating weekly church-based sessions for Datooga people. Portions will be distributed through eight established congregations and 21 small parishes in hard-to-reach communities.

“In addition to the use of audio [Scripture], the literacy component facilitated by [BST] is key in bridging the gap and enabling those unable to read interact with Scripture,” said Dr. Fabian N. Dapila of the Bible Society of Ghana.

Cyclists ride 2,000 miles to help women in the Congo

6 Million Bibles in One Year

Brazil’s Bible Society printed a record number of Bibles in 2009. Photo by ThrowingLight.comThe...