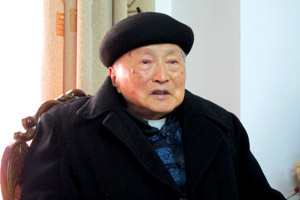 Bishop Aloysius Jim Luxian has a deep devotion to God's Word, which is his source and strength. Photo by UBSCP/Yeo Tan Tan.

During the interview, Bishop Jin shared his profound love of the Scriptures growing up as a Catholic boy. “Since I was young, I have been reading the Bible,” he said in the interview. God's Word also was a central part of his life when he entered the monastery and the Society of Jesuits.

“I love the Bible,” he said, “especially the Gospel of John, which I memorized in Latin.” These words from the Scriptures would fortify Bishop Jin in the dark times of his life, especially when he was arrested in 1955 for suspected subversive activities on behalf of the Church. He was released in 1982.

“It was from memory that I was able to recite and reflect on God's Word from John's Gospel during my imprisonment,” Bishop Jin said. For the bishop, God's Word was — and always has been — his strength and hope.

A full transcript of this interview can be viewed at ABSRecord.com/Bishop

Although the Quichua Cañar people of central Ecuador have the Bible in their own language, high levels of illiteracy prevent the majority from engaging with it. And illiteracy has been shown to contribute to epidemic levels of domestic violence in this community. To address this problem, United Bible Societies in Ecuador is working closely with rural churches to launch Read to Live, a Scripture-based program tailored to meet the reading and healing needs of this community.

“We hope people will be closer to God through learning to read,” said Patricio Gonzales Gaspar, general secretary of UBS in Ecuador.

Most of us take our copies of the Bible for granted. But not those who attended the launch of the revised New Testament in Patamuna, a language in Guyana. Many had to walk two to three days to attend the dedication held at a primary school in Kato village.

Speakers of Patamuna received the first translation of the New Testament in 1973, but they found it too difficult to understand and in need of revisions. After years of discussions, the process began in 2006 with indigenous translators. Six years later, the celebration of its completion took place in Kato.

Many were moved to tears when the Scriptures were read. Together with the Christian Patamuna leaders, the group prayed for God's blessing upon the revised New Testament. After the dedication, many people rushed to purchase their own copy.

American Bible Society, together with the Green Family (an ABS donor and collector of sacred artifacts), sponsored Verbum Domini, an exhibition of rare biblical antiquities that was on display in Vatican City this spring. The exhibit assembled more than 150 of the world's rarest Bible texts and artifacts from the Green Collection.

On display were items significant to people of various faith traditions. It included the Jeselsohn stone or Gabriel's Revelation, a 3-foot-tall, first-century B.C. sandstone tablet discovered near the Dead Sea in Jordan.

Also shown were Richard Rolle's Psalms, Canticles and Commentary. This is the earliest, most extensive surviving manuscript of the translation and commentary of Psalms and Canticles composed 40 years before Wycliffe's vernacular translation of the Scriptures. The exhibit also featured the Hagia Sophia Lectionary, a mid-11th-century manuscript that contained Scripture readings, along with a list of ceremonies of the great Church of Hagia Sophia.

Pastor Jacob and his colleagues on the Makhuwa-Meetto translation team know their work is vital to the spirituality of the people in Mozambique.

“People are so hungry for God's Word. Out in the villages, they are starving for it,” Pastor Jacob said.

He and the translation team have accomplished much on the Makhuwa-Meetto Bible translation. So far, they've published the books of Genesis, Jonah, Mark and James. This translation is a collaboration with the Bible Societies and The Seed Co., an organization that partners with national Bible Societies to complete translations in the heart languages of people without God's Word.

Aside from spreading the hope found in the Scriptures, the translations are actually popularizing the written form of the language. In fact, local shop owners now use written Makhuwa-Meetto in business.

Pastor Jacob and the translation team will soon be ready to test the Gospel of Luke with community members.

End to End Program Engages New Believers in the Scriptures

1 of 85 Million Bibles for China