God's Word in Action: Responding to Hurricanes Gustav and Ike 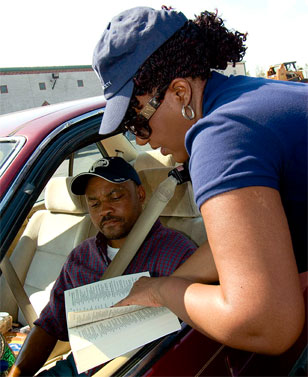 Southeast of downtown Houston, in a line stretching out-of-sight down Galveston Road, individuals and whole families, all victims of Hurricane Ike, waited in cars, SUVs or pickup trucks for their turn to drive through the Operation Compassion emergency food line organized in the parking lot of Praise Chapel. There in the midday heat, ringed by 18-wheelers packed with food and other essentials, volunteers loaded trunks or back seats with boxes of frozen chicken, containers of macaroni and cheese, 20 pound bags of ice, and cartons of water, juices and toiletries.

But first stop on the line was for spiritual food — for prayers and ABS Scripture resources. There were choices: Spanish or English? How many for adults? How many for children? No one refused a Scripture.

Thanks for a Miracle

Back for a second day, John Murray wanted to thank someone for his 24-hour miracle. Stress in the aftermath of Hurricane Ike, coping with his family’s needs and chaos at work had so stressed John that he lost his temper and his job. Yesterday he had come to the distribution site desperate for food, water and, he told a woman volunteer, a new job. She offered him a Bible and said, “Let’s pray about this.”

The next morning, after reading his Bible, John he received a call from his former employer, who not only gave him a new job in a new department, but at a higher salary. Wiping tears from his eyes, John told Delores Burnett, Manager of the ABS Constant Hope disaster response program portfolio, “God is the same yesterday, today and forever. He has blessed me. If you pray he will answer.”

Delores prayed with Mr. Murray asking God for his continuing care. Delfina Medrano, an elderly woman, came through the line desperate for something to eat. Delfina told Delores, “I prayed for help and this distribution site was God’s answer; God is awesome. I needed food and now I’ve received it. God is awesome.”

The Right Message, the Right Time

This season two hurricanes have overwhelmed millions in Haiti and along the coasts of Louisiana and Texas, flooding homes and destroying lives. Once again the American Bible Society has answered victims’ cries for help and hope by providing more than half-a-million Scriptures.

On the 3rd anniversary of Hurricane Katrina came Hurricane Gustav, battering the citizens of Baton Rouge, many of whom were still rebuilding their lives after the havoc visited on them by Katrina.

Christian relief organizations such as Operation Compassion, Convoy of Hope, and Otra Onda, a Hispanic ministry to youth in the Houston area, sprang into action with relief aid and Scriptures. The American Bible Society (ABS) worked alongside them, providing Scriptures to weary and displaced victims. Operation Compassion volunteers provided up to 1,000 families a day with warm meals, water, food, items for personal hygiene, cleaning supplies and tools. ABS volunteers offered prayer and provided Bibles.

Baton Rouge resident, Maria Marta, said that she had been praying for a miracle because she had nothing to eat. The next day, the teams from operation Compassion and ABS arrived with food and the Word of God. “I now have hope,” she said, clutching her Bible.

Two weeks later Hurricane Ike swept away much of Galveston, Texas and pummeled Houston with 110 mile per hour winds and torrential rain, leaving thousands stranded and millions without electrical power. Within 72 hours of Ike making landfall, 200,000 copies of ABS Scriptures were made available to victims coming to Operation Compassion distribution sites, desperate for food, water, toiletries, solace and hope.

Marriage of Help and Hope 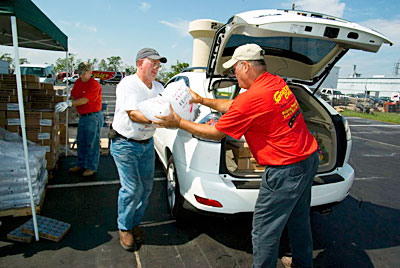 Volunteers load ice to protect the frozen chicken they donated to a Hurricane victim by Operation Compassion. Photo by David Singer

Houston’s First Baptist Church turned its parking lot into a mammoth outdoor kitchen, where volunteers cooked meals with food provided by the Red Cross. Red Cross vans then fanned out across the city, delivering the hot meals to hungry victims. Included with the meals were ABS Scriptures.

William Taylor, First Baptist’s Pastor for Missions said church volunteers had cooked 173,000 meals for hungry victims within the first week following Ike. Recalling First Baptist’s partnership with ABS at the Astrodome following Hurricane Katrina, Rev. Taylor said, “The American Bible Society marries the spiritual with the physical. This is a most important time; when a person is alone and desperate —that is when they turn to God. They need the Scriptures to be assured that God is a very present help in their time of trouble. The Bible Society has been a critical partner is this relief effort.”

Responding to the Bible’s Call

Cyclist ride hundreds of miles for the Women in Congo