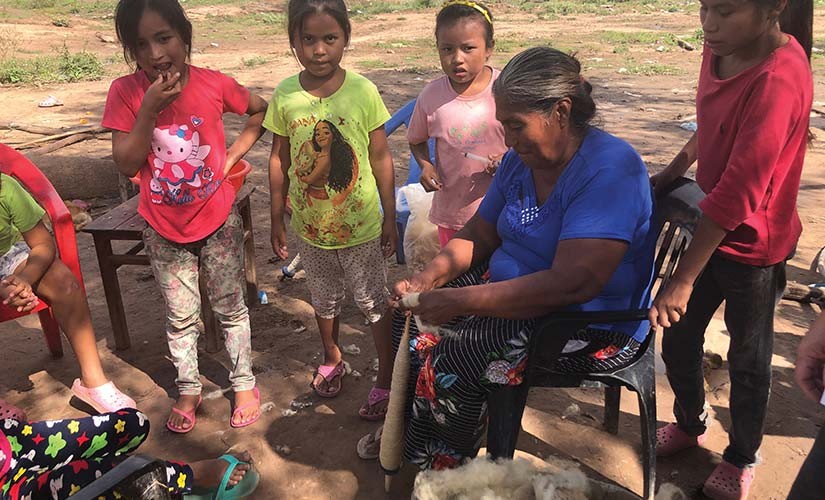 Picture: a woman named Aurelia, raised on rainwater and the promise of better. But things get worse and worse over a few short years: The river bursts its banks. Her home washes away, the mud walls dissolving in the downpour. The lands her community has worked for years are as devastated as its farmers. The sheep that yielded good wool have run for the hills. Her family is forced to relocate—away from electricity and what comfort they had.

In her transient shelter, Aurelia gives birth to another child, making it four children and one mother at home. When illness strikes, it nearly takes her life and her four-year-old daughter’s.

Everything changes, however, when she cries out to God and asks for healing. The illness recedes, and the family learns how to trust God.

Through the local Bible Society, Aurelia’s family receives literacy training and a copy of the New Testament in their language, West Toba. The truth slowly changes how they understand existence, their purpose. They begin to rely on God, casting their fears at His feet. Although their community faces big challenges, they feel prepared to face them with God on their side. In God’s Word, they find strength for what’s next.

A Promise for the Toba

Flashback to 1851. A young missionary named Allen Gardiner lays dying on the beach in Tierra del Fuego, Argentina. His crew had attempted to evangelize the Fuegians but had not been well received. They ended up dying from lack of access to food and fresh water.

The words Gardiner leaves behind—letters strewn on the beach—issue a promise to the Toba people: a translation of the Bible in a language that speaks to their heart.

He writes, “We have sent this Book to many other nations, and all who have received it have been made happy and wished they had known it sooner. Why should the Toba nations be the last to receive this Book?”

The Toba are indigenous to the lands from the Pilcomayo River to the Bermejo River in Northern Argentina. Of all the native groups in Argentina, the Toba have best preserved their language. That’s partially why it’s been such a challenge for them to understand the Bible in Spanish; it doesn’t resonate for them.

Sadly for the Toba, Gardiner’s vision died along with him on that beach. Future missionaries to the area chose to work with different people groups. The Toba were left with an unfulfilled promise.

In the years following 1851, the Toba subsisted on fishing and gathering honey and fruits; they never tasted the sweet words of Scripture.

Now, however, 168 years later, Gardiner’s promise is being revived. Your support and a local translation team are bringing a Bible to the Toba people. The Toba New Testament was completed last year, and a full Bible is scheduled to be released in 2025!

A New Testament for Aurelia

Aurelia was taught to survive off the lands along the river. She was taught how to fish and cook over an open fire—and she was taught not to anger the spirits that inhabited all things. Aurelia, like most of the Toba, followed shamanic practices—until she fell ill and couldn’t find relief. “I was sick and my daughter was sick. We thought we wouldn’t live,” she says.

Although Aurelia wasn’t a believer, God supernaturally drew her to Himself. “God touched my heart,” she explains. “We had to cry out to God to heal my pain and my daughter. I had to open my heart to God.”

This experience changed Aurelia for good. Aurelia started taking her children to church where they could learn more about God. She asserts, “God healed us so we can come to Him.”

Although she faces long days as a hardworking, single mom, Aurelia finds strength in the Word of God. “The most important thing is to listen to and read the Word, because it cleans me. I am not thinking bad things, and I am praying for the health of my family.”

Aurelia believes it’s critical for her to know God’s Word so she can raise her children up right. A desire to see her children grow in their faith drives her forward.

“Since we are mothers, we have to read the Bible and understand it.… The kids should be in church to learn the Word of God, listen to music so God can speak to them.”

In addition to spiritual strength and wisdom, Aurelia has found practical help in the Bible. Although her physical situation is uncertain and precarious, the Bible has taught her to trust the Lord through all things. She says, “Sometimes I feel sick, but I have to trust God. Sometimes I suffer and I don’t have anything, and I have to trust God in providing [for me] and letting me know what to do, and He has helped me. Sometimes I dream and have bad dreams, but when I pray, the Lord helps me.”

Aurelia is grateful for Scripture that deepens her relationship with God and helps her in her day-to-day life. She smiles, “The Word helps me to feel closer to the Lord.”

Although most Toba are now professing Christians, some have folded Christian concepts into their preexisting animistic and shamanic beliefs. For example, traditional belief asserts that nonhuman or supernatural beings govern all existence. After early Christian influence, people still believed these beings existed—just that they were demonic. However, now that they have the New Testament, Toba Christians are standing on biblical truth and recognizing the God who is the ruler of all.

The Toba are shifting away from age-old practices. For example, Aurelia says, “Some people take their kids to the witch doctor, but I don’t. I ask God for help to heal them and money to take them to the doctor, and God helps me.”

Like Aurelia, many Toba have seen how different their lives and outlook are thanks to their newly translated Scripture. Susana says, “The Bible has changed me. I am a new Susana as a result of the New Testament in West Toba. The Bible changed my thinking and behavior. I realized that I don’t talk bad to my neighbors, I need to treat other people well and talk to them well, and I have started to treat them well.”

The Bible isn’t just helping individuals; it’s changing the whole Toba people group. Like we’ve seen time and time again, when a community receives the Word of God in its language, people start acting differently—wisely and more graciously. Susana reports, “There is a change among the women. They are used to talking bad and criticizing each other, and through reading the Bible we realized it is not good to do that and it has changed how we relate to each other.”

Zacarias Florencio, a West Toba speaker, was a heavy alcohol and drug abuser, but he says, “After reading the Bible in my language, I changed and left those things and changed the behavior and stopped drinking alcohol. The community drinks a lot of alcohol so this is a significant change.” Praise God for how His Word is breaking chains for the Toba!

A Future, Because of You

Because of the generosity of partners like you, the Toba can understand and apply the words of life. Thank you.

Our work is not done, however. The Toba people have grown leaps and bounds after receiving the New Testament. Now they’re longing for the full story, scheduled to be completed in 2025. “When we have the Old Testament, we will be able to learn everything that the Bible says,” Zacarias says.

“When we have the Bible, we will have to live it, understand more, and we will be able to share more with other people.”

Picture now: Aurelia and her children, full of eternal hope. Things get better and better—Aurelia is happier and kinder, the siblings care for one another, the whole community pitches in when someone is in need. Aurelia knows that there is a God who loves her, and she loves God back. Her children grow up strong and certain: My God will provide. They grow up confident and resilient: My God is alive. They grow up reading John 20:31 and living on its promise: “These have been written in order that you may believe that Jesus is the Messiah, the Son of God, and that through your faith in him you may