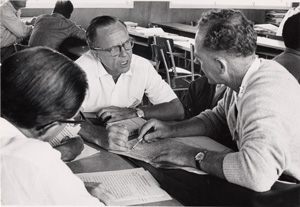 The global Bible translation community lost one of its iconic figures with the passing of Dr. Eugene Nida, who died yesterday at age 96. For more than 50 years, Nida was the leader of the translation program of American Bible Society.

“Today we celebrate the life and legacy of Dr. Eugene Nida,” said American Bible Society President Lamar Vest. “Dr. Nida’s contributions to Bible translation in the 20th century cannot be overstated. He revolutionized how Bible translation is done around the world. Through his work, millions of people have been able to read the Bible in their own language and discover its lifechanging message.”

A communicator as well as a scholar, Nida integrated concepts from linguistics, cultural studies, communication sciences and psychology to develop a practical approach to translation that became known as dynamic equivalence or functional equivalence, the goal of which was to make the translation clear and understandable as well as accurate. Beginning with American Bible Society’s translation Good News for Modern Man (1966), his methods went on to shape Bible translation efforts around the world.

Known for his boundless energy, Nida spent much of his time traveling the globe establishing and training teams of translators, consulting on the preparation of critical scholarly editions of the Bible, and championing the reliance upon the indigenous translators as a means of creating new Bible translations that would resonate profoundly with the intended audiences.

The author or co-author of more than 50 books and countless articles, many of Nida’s works continue to hold a place of unchallenged significance in university curricula, not only in the U.S., but also in Latin American, Africa and China.

In 1978, Christian Herald magazine hailed Nida as having “done more than any one person to provide people with Scripture they can read in their own language.” In 2001, American Bible Society honored Nida’s impact on Bible translation and scholarship by naming its new Bible translation arm the Nida Institute of Biblical Scholarship.

Dr. Phil Towner, current dean of Nida Institute, praised Nida’s impact on Biblical scholarship saying, “When the history of the Church in the 20th century is written, the name ‘Eugene Nida’ will be writ large.”

Exploring the Treasures of the American Bible Society Collection

Christian Leaders Challenge One Another to Walk the Talk