Bringing the First Bible to the Cho Chin People of Myanmar

Rev. Thang Ngai Om says being the Cho Bible translator is the crowning achievement of this life 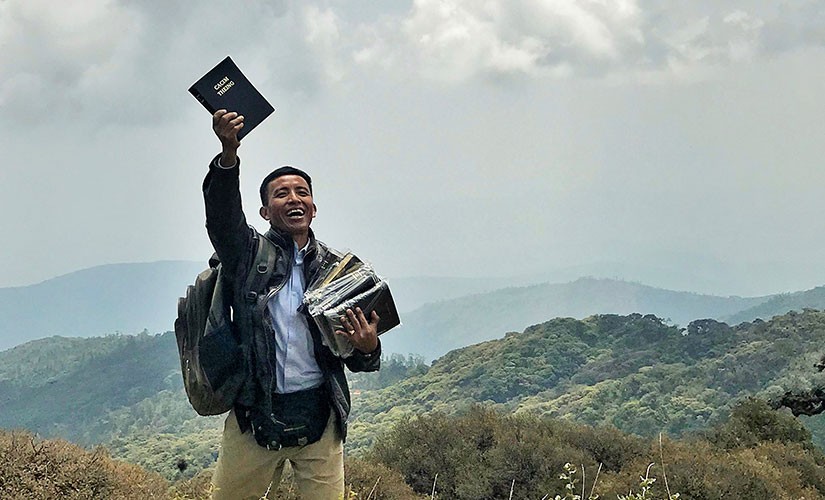 For more than half a century, the Cho Chin (or Mindat Chin) people of Myanmar have been waiting for a Bible in their language. So when the Cho Bible was finally completed last May, there was a jubilant celebration. The day after the launch, Cho Chin people and the Bible Society gave thanks to God for His Word by hiking to the peak of Mount Victoria, the highest mountain in Myanmar’s Chin State.

The Cho Chin people group was introduced to the saving power of Jesus 70 years ago. At the time, missionaries to the area said people almost never used the word “forgiveness.” Instead, they leaned on revenge for justice, making murder commonplace. Now, however, because of the Good News of Jesus, they have dramatically changed their behaviors. People now forgive and care for one another, and there are several large churches in town. On May 25, 2019, they received the first Bible in their language—allowing them to finally hear and understand God’s full message.

The key Bible translator on the project, the Rev. Thang Ngai Om, is especially grateful to God for this Bible. He was born and raised in a Buddhist family. Then he met Jesus, and everything changed. When he decided he wanted to learn English, a local missionary convinced him to go a Bible school—even though he knew nothing about the Bible. He scored a zero on biblical knowledge on the entrance exam, but the principal allowed him to be admitted because he saw he was a promising student. He was right: Thang Ngai Om went on to study theology and become a pastor. Then he found his true life’s calling in translating the Bible into Cho.

Thang Ngai Om dedicated more than 25 years of his life to finishing the Cho Bible. The journey to the translation office in Yangon from his home town took him almost a week each way, but he endured. When floods washed out the roads during the rainy season, he still made the journey to meet with translation consultants—almost losing his life and the Scripture manuscripts in one particularly risky river crossing.

In May, Thang Ngai Om held the completed Cho Bible for the first time. Through tears he declared every sacrifice he’d made to be worth it. “Even if God calls me, I am ready to go now,” he says. “I am more than 70 years old now, and I am happy with my life—being a Christian, being a pastor, and being a Bible translator.”

Thang Ngai Om believes this Bible will help draw his children and his children’s children to God. “I have seen the Bible in my life, and it’s all my legacy for the next generations,” he says.

Now, local believers are carrying hundreds of copies of the Cho Bible to their churches. Thank you for supporting translators like the Rev. Thang Ngai Om in bringing God’s Word alive—both for current generations and for generations to come.