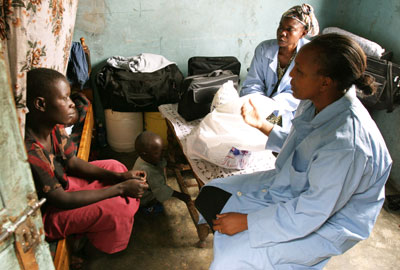 Home-Based Care workers visit an HIV/AIDS patient in a poor area of Nairobi, Kenya. African Evangelistic Enterprise, supported by the Bible Society in Australia (New South Wales), is running an HIV/AIDS Awareness Project and a Home-Based Care Project in areas like this one. Photo by Martin Johnson.

In his strategy report on how best to combat the HIV/AIDS pandemic, Mark Forshaw at the American Bible Society (ABS), a veteran of the World Health Organization’s HIV Department, concludes that any effective approach needs to be holistic, bringing about behavioral change by engaging societies at all levels. Mr. Forshaw draws most of his examples from Africa where the devastation wrought by the disease is most severe.

Sub-Saharan Africa is the most infected region in the world. It accounted for an estimated 1.7 million new infections in 2007, raising the number of Africans infected to 22.5 million out of the global total of about 33 million. This means that the poorest continent in the world, with the lowest heath-care capacity, is the hardest hit.

Looking Behind the Curtain

Charles Krueger, who pioneered ABS’s HIV/AIDS African outreach says, “Strange as it may seem, Africa today is the most Christian of all continents, one where Christianity is openly proclaimed. Yet it has been difficult for Africans to come to terms with AIDS, keeping AIDS hidden behind a curtain of shame and guilt.”

Even worse, it is fathers and mothers, the caregivers and nurturers who are struck most often, impacting millions of children with the loss of one or both parents. In 2005, AIDS in sub-Saharan Africa orphaned an estimated 12.3 million children, leaving many of them to fend for themselves, homeless, hungry, vulnerable to abuse and in danger of contracting the HIV infection themselves. Of the 2.1 million children living with HIV/AIDS, 1.8 million live in sub-Saharan Africa.

Where Is the Good Samaritan Today?

ABS is working in dozens of countries throughout the African continent, partnering with members of the United Bible Societies (UBS) fellowship, relief organizations such as Samaritan’s Purse, churches and the broader Christian community in a people-to-people approach to fight the HIV/AIDS pandemic on many levels.

This effort is built around the Good Samaritan program developed by the UBS; at its core are two booklets. Where Is the Good Samaritan Today? challenges all Christians to join in the fight against HIV/AIDS, beginning with the need for Christians to show compassion and forgiveness to victims and learn to deal openly with it. The other, titled Take Charge, is a Bible study for young people. The booklets, translated into seven African languages, combine sketches, facts and case studies with appropriate Bible texts. The purpose behind each is to lead people to live according to biblical principles - to change their behavior and to make responsible decisions.

The ABCs for Change

In addition to the booklets, the Good Samaritan project comes with an outreach that includes posters, an audio drama, videos, flip charts and a Bible Portions guide. Take Charge is also available as a video in both English and French. 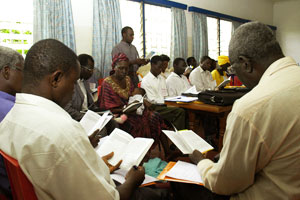 Prevention is achieved only by changes in lifestyle - changes shaped by principles prescribed in God’s Word. ABC is an acronym used to summarize the prescription for prevention. A calls for abstinence outside of marriage. B stands for “Be faithful”, — life-long faithfulness to one partner within a marriage, and marks the faithful use of condoms by high-risk groups where sexual relations are likely to occur outside of marriage.

Where prevention fails there is the need for compassion and caring. Perhaps more so in Africa than elsewhere, a stigma is attached to those living with HIV/AIDS. Victims of HIV/AIDS have become Africa’s lepers in the 21st century; they are shunned and the stigma attached to living with HIV/AIDS makes many reluctant to come forward for testing, thus increasing the spread of the disease.

When Winnie Neongowane, living in Swaziland, tested positive for HIV she said people were polite, but behind her back they would talk about her. She says, “I had all these questions; was I being punished by God because I had sinned? Was HIV/AIDS created by God for punishment?” She says that because she went through the Good Samaritan project, now, “I have a tomorrow.”

Sphiwe Ngenya, also from Swaziland, says, “The Samaritan project provides a Christian environment outside the church that enables me to discuss openly with others the challenges of a world turned upside-down by HIV/ AIDS.”

In the southern region of Mozambique where the HIV infection rate is 23 percent, ABS is working with the Bible Society of Mozambique (BSMz) to train pastors from 150 churches. They will involve 65,000 people in the Good Samaritan project, educating them on how to help prevent the spread of the virus. To counter the stigma attached to infection they will promote caring for the sick and vulnerable.

In Zimbabwe, ABS is working with the Bible Society (BSZ) to reach out to the military, where the HIV/AIDS infection rate stands at an astonishing 80 percent. Working with Defense Force chaplains, the Bible Society will provide Bibles and Good Samaritan project materials to the entire 35,000-member military. This effort follows a pilot project initiated by the chaplains that had proven effective in changing behaviors.

Working with the Ministry of Education, ABS has already helped the BSZ train church volunteers to apply the Good Samaritan program with 20,000 public school students in ten provinces. Working with the government and NGOs, ABS assisted the BSZ in distributing Bibles in English and two indigenous languages, along with 40,000 copies of the Good Samaritan booklet and Living in Hope Scripture Portions to widows and orphans.

In Botswana, ABS aided the Bible Society to carry out the Good Samaritan project among young people from eight different faith traditions and four primary schools. In 2006, BSB ran HIV prevention Bible study groups in four other schools. As a result 850 students enrolled in Bible study clubs, stressing sexual abstinence outside of marriage.

Funding is being sought to conduct a similar program with the Bible Society in Swaziland where the HIV infection rate is estimated to be 40 percent. The huge number of people dying from AIDS in Swaziland has exacerbated existing poverty and reduced the median age of its population to less than 15 years. The Bible Society aims to reach 3,500 children through Bible-based HIV/AIDS awareness groups.

With ABS support the Bible Society of Kenya (BSK) launched its Good Samaritan outreach with a three-day training workshop attended by more than 200 volunteers.

With the assistance of ABS the Bible Society of Cameroon (BSC) aims to engage more than 2,000 children living in orphanages and reintegration centers with age-appropriate Scriptures. AIDS-related deaths have so overwhelmed orphanages that providing for children’s physical and material needs has severely limited any Scripture engagement.

For this three-year project BSC will partner with a local missionary organization representing 57 churches, with pastors from another 15 churches and with managers from 50 orphanages and centers, each caring for at least 54 children.

Children ages two to five will illustrate and listen to Bible stories. Children five and older will attend a 45-minute Bible study conducted by volunteers from local churches three days a week and meet for prayer each day before school.

Good Samaritan projects have been shown to change lives. Behavioral changes, such as increased abstinence and monogamy, a rise in the average age of those engaging in sexual relations, a reduction in the average number of sexual partners and more frequent use of condoms are all credited with reducing new HIV infections in Uganda. Beginning in the late 1980s, infection rates continued to fall sharply until the mid 1990s. Uganda’s entire population was mobilized in the fight against HIV.

Much of the prevention work in Uganda occurred at a grass-roots level, with a multitude of tiny organizations, often made up of people living with HIV educating their peers. This helped break down the stigma associated with AIDS, encouraging honest discussion of sexual subjects that had previously been taboo.

“The World Health Organization,” writes Mr. Forshaw, “concludes that faith-based organizations (FBO) provide between 30 and 70 percent of all healthcare in sub-Saharan Africa and that FBO efforts in HIV/AIDS care and prevention are at least as significant as state-funded healthcare.”

He concludes, “Aside from providing service, the Church has a unique role in Africa. Its moral teachings provide life-saving guidance on relationships and marriage, while it encourages believers to follow Christ, who cared for the leper without sigma or conditions.”

“This Bible has changed my life so much.”

Providing light and healing for refugees, even in the darkest pain.