A Soul Saved from a Life of Crime 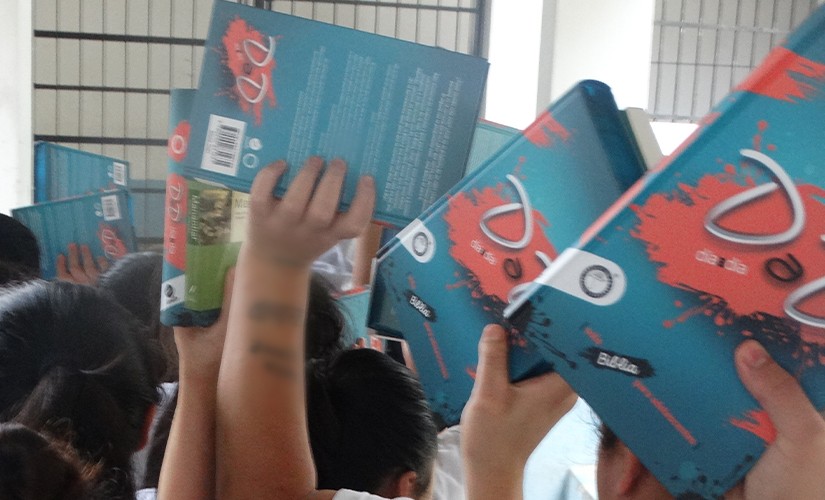 Mario* was just 6 years old when he joined a gang in Central America. Abandoned by his mother and violently abused by his father, he longed for a ‘family,’ and the gang took him in.

He began with shoplifting and other minor thefts, and by age 12 he was arrested by the authorities and placed in a rehabilitation shelter for youths. He escaped the shelter, but four years later he was back — and then considered one of the gang’s leaders.

Bible Society volunteers visited the shelter regularly, passing out Bibles and teaching the boys about Scripture. Mario showed no interest at first, but little by little, that began to change. As his heart began to open, Mario started to encourage others to attend Bible studies with him.

One day, the volunteers entered the room to find Mario sitting in the front row, eager to learn about God’s grace. As they handed out Bibles, a volunteer approached Mario and asked him to read John 3:16. Mario read the passage to himself, tears rolling down his face.

“Thank you,” was all Mario could say as he hugged the volunteer.

Because of the faithfulness of American Bible Society financial partners, children like Mario can experience love and acceptance through the Bible, many for the first time in their lives.

Mario’s heart has been transformed, and now he is helping other gang members move from a life of darkness to a life in the Lord’s light. We are thankful to our financial partners for being a critical part of that transformation.

Giving the healing and hope of Scripture to survivors of brutality in Colombia.

“The only thing that could reach my heart was the Word of God.”

A Bible revival is happening in Central America’s gang prisons!