The Bible at work in Russia 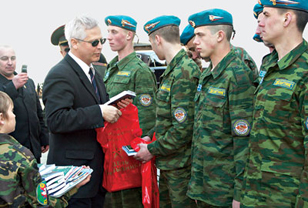 The colorful faith of the Russian people is shown in military distribution programs. Photo courtesy of Bible Society in Russia.

The Bible Society in Russia was founded in 1813, during the period of history recounted in War and Peace. As the story goes, in 1812 the mighty Emperor Napoleon Bonaparte and his 600,000 troops invaded Russia and ran an offense against the Russian army — which was only half the size of the French.

According to Anatoly A. Rudenko, executive director of the Bible Society in Russia, in the middle of this conflict Czar Alexander I had an encounter with his friend the Grand Duke Alexander Golitzin. They were discussing the war when Golitzin's Bible fell from a table and landed on the floor, open to Psalm 91. The duke read the Psalm aloud, assuring the czar of God's support and defense. The next day the czar heard Psalm 91 read at a church service and took it as a sign that God was real and would defend the Russian people.

He searched for a Bible for personal reading but could not find one anywhere in his palaces. Finally, his wife (Princess Louise of Baden, Germany) gave him a French New Testament because there were no contemporary Russian translations. As Alexander began reading the Scriptures daily, he found the wisdom, courage and strength to inspire his defense.

Winter arrived, and the tide reversed. The Russian troops began advancing against the French, driving Napoleon and his regiment out of Russia. Alexander attributed the dramatic turnaround to his having God's power on his side, and in 1813 he saw to the formation of the Bible Society in Russia.

That chapter in the Russian Bible Society's history was closed only a few years later in 1825, after Nicholas I rose to the throne. And it was not until the fall of Communism that a new chapter for the Bible Society would be open for the Russian people. The Bible Society in Russia was reborn in 1990, with Mr. Rudenko at the helm. According to his assistant Nikolai Kournikov, the Society's four branches within the country are now making up for lost time: “24 hours a day, seven days a week — publishing, translating and distributing the Living Word of God.”

Each of the branches does its part. Moscow heads up publishing, sales, distribution and preparation for the Contemporary Russian Version (CRV). At present, a translation of the New Testament and 14 books of the Old Testament is complete; the goal is a full Bible translation into modern Russian that is clear and understandable.

While Moscow works with the Russian language, the branch in St. Petersburg supervises translation projects for ethnic-minority languages. At present there are six such projects: the Old Testament for the Altai, Bashkir, Buryat, Chuvash, Ossetic and Yakut languages. And centers in Novosibirsk and Vladivostok are busy with Scripture distribution and sales for their regions.

Just as Czar Alexander I looked to Scripture for guidance concerning his army, the Bible Society today reaches out to the Russian armed forces, providing a guide through which they too can find strength. Garrisons are stationed all over Russia's vast territory, often in remote areas. While some stations invite Russian Orthodox clergy to counsel the soldiers, the Bible Society of Russia is there to provide nondenominational, quality study Bibles and materials.

In 2006 Scripture was distributed to the military in four areas: the Chechen Republic, Grozny, Moscow and St. Petersburg. And in 2007, Mr. Rudenko handed over sets of these Bible libraries in the Volga region as well. Now, at the end of 2007, the project is complete. In addition to Russian Orthodox chaplains, the armed forces themselves, including regional commanders, their deputies, and officers responsible for training and education, have received biblical libraries. Sets have also been placed in the chapel library of every medical and rehabilitation center.

These biblical libraries are put to good use because, as Father Alexander Borisov, president of the Bible Society in Russia, says: “Reading the Bible ensures that soldiers can discern good from evil.” The Bible Society in Russia and the Russian forces indeed have a history together. And the story has not ended: A proud tradition continues in a country that is seeing its way to the future.

”Whoever goes to the LORD for safety, whoever remains under the protection of the Almighty, can say to him, ‘You are
my defender and protector. You are my God; in you I trust.’” Psalm 91.1,2 (GNT)

Living Water for Victims of Drought

Photo courtesy of John Mathews About 800 million people — including 70 percent of Chinese Christians — live in...

James Maxey, Antonia Carcelen-Estrada and Stefano Arduini engage in a discussion at the Nida School. ...